Please share your recipes ideas, or post a recipe that you want some feedback on. Successful recipes can be added to our Recipe Database for other MiniBrewers to use. Please contact an admin.
Post Reply
4 posts • Page 1 of 1

For those of you wondering, Pliny the Elder was considered to be the best Double IPA in the World for quite some time winning several awards.

It's pretty difficult to match the original, since RR uses hop extracts to avoid the grassiness that comes in using so much hops. Even though Vinnie Cilurzo, the guy which created this beer at RR, has put out the "original" recipesome time ago there are many adaptations and alternative clone recipes flying around.


Version 1
I also struggled adapting the recipe to MiniBrew since the limitations of hop drops during the boil but I decided not to follow the recipe and risk a calculated IBU of 200+. I've adjusted the amounts of hops to a moderate level of 75 IBU planning to raise the amounts of boiled hops in future versions if required.

Please find below my current version of my MiniBrew adaptation of the recipe. I changed the mashing scheme a bit and, as mentioned, reduced the amount of boiled hops. On some points of the recipe I added in some Amarillo hop replacing either Columbus or Centenial, which was inspired by a blog post and since I've used Amarillo in the past and it's one of my favorite hops, I thought it might be a good idea. I wont't add any dextrose, since I am fine with the resulting lower ABV. But's due to the lower ABV it's not a real DIPA anymore.

Result
When the beer finally reached serving stage I couldn't wait to taste it and I was not disappointed at all. Great smell, lots of fruit but also resinous notes. The taste was dry, not really malty and with a significant bitterness, not unpleasant but somewhat borderline. Overall a very good DIPA for my first try. Everyone who has tried it so far liked it and was considerably less critical than me. On the other hand, I was now curious about what surprises there would be after a few adjustments.


Version 2
Now that I have tasted the first batch brewed with Version 1 of the recipe, it's time to make some changes. Please consider, that I have never had the chance to taste the original Pliny The Elder, so all adaptation I will be making, will be made based on my personal preferences in taste with respect to the beer style.

A Double IPA must have a noticable bitterness but I think the calculated 75 IBU are still to dominant, so I went down to 65 IBU in the Version 2. West Coast Style IPAs and DIPAs tend to be dry in flavour and Version 1 was dry. Too dry for me with nearly no malt character. To change this, I decided to adapt the mashing scheme a bit to maybe increase the amount of dextrine sugars, which cannot be converted to alcohol by the yeast but should raise malt characters and take some of the dryness. For a darker color I switched from CaraRed to CaraAmber.

When I brewed the first batch I used the hop spyder for dry hopping. A very nice feature really, but you need to take it out for the second addition of dry hops, open it, spilling around and wasting some of the beer and risking an infection. Thefore I decided to add all the dry hops at once for Version 2, it makes things easier and I think it should not make much of a difference. I will report my experiences as soon as the batch brewed with Version 2 gets ready.


Version 3
Since I now know about the issues brewing Version 2, I already could make some improvements and created Version 3. It's basically a Version 2 but with 2 conditioning stages after primary fermentation to remove the yeast (we have enough esters at that point). Even though the beer is ready to drink after secondary fermentation (dry hopping) I would recommend to give it a few more days to "age". Therefore I added two additional conditioning stages (7 days in total) at the end before carbonating. After removing the dry hops and letting the trub settle for another day feel free to already start carbonating but do not forget to remove trub container for this.


Version 4
The color of my "pliny" has kept me thinking. It should be a bit darker. For Version #3 I already changed CaraRed to CaraAmber (35 SRM) but now I raised the used amount so it should nearly reach 13 SRM overall. You can't really see it on the picture because sun light makes it seem lighter but it's noticably darker than Versions 1-3. It came out well, the taste was some kind of more full bodied. I used Fermentis Safale-S05 but already have put in Mangrove Jack's M44 in the recipe because I plan to give it a chance. I liked Version #4 very much, just give it a try.


"Custom Ingredients" added to Brewery Portal
Since I was missing Weyermann CaraPils, CaraRed, CaraHell and CaraAmber malts, I added those to the portal using the following values:

I am going to make a small variation of your 4th version (a variation as I lack some ingredients).

250gr Caramamber I will replace with melanoiden malt and CaraMunich III to get similar EBC.
I'll add some extra oat malt for mouth feeling.

And I don't have the Centennial hop, but will replace it with Chinook.

Let's see how it turns out

Added to the database

I am going to make a small variation of your 4th version (a variation as I lack some ingredients).

250gr Caramamber I will replace with melanoiden malt and CaraMunich III to get similar EBC.
I'll add some extra oat malt for mouth feeling.

And I don't have the Centennial hop, but will replace it with Chinook.

Let's see how it turns out 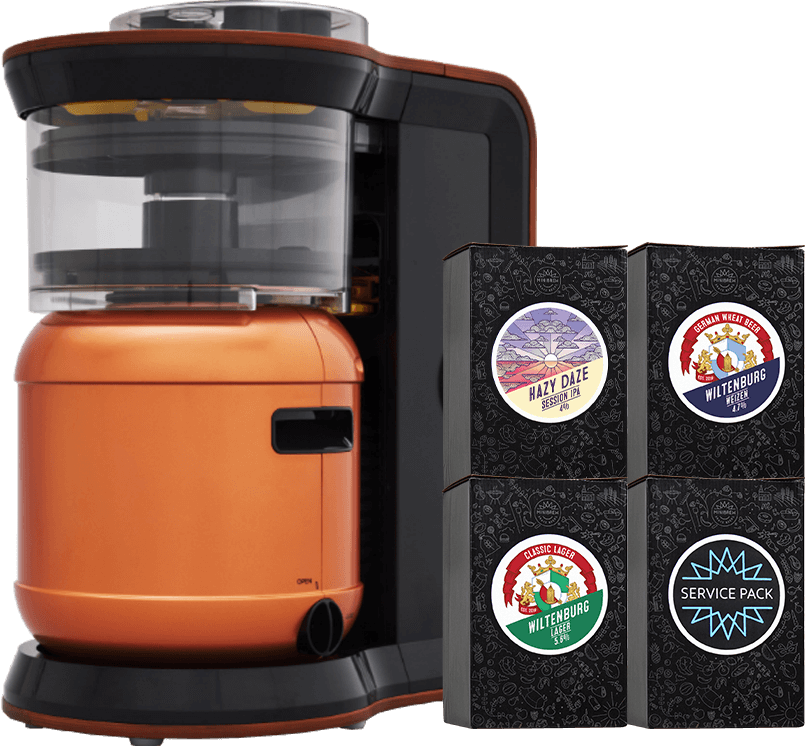 Please search for your question before posting as chances are, someone has asked before.

If you're new, welcome! Please introduce yourself in the Introductions section to the left.

We love the MiniBrew but are not in any way affiliated with them. We will not talk about/do announcements on behalf of MiniBrew. We also only provide third party assistance, this is not MiniBrew Support. If you have a suspected faulty unit, please contact MiniBrew Support directly.

MiniBrew Brew Pack recipes are intellectual property. This means we cannot and will not discuss ingredients, hop drop times etc. You can ask for help brewing them though. See the appropriate section to the left.

We are an active group of members. Please contribute where you can. We only all get out what we all put in!

Try and keep your language PG13. Swearing is tolerated but please avoid where you can.

Our community runs on donations.